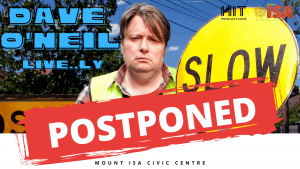 POSTPONED! Please keep an eye on our socials for information on a new date to see Dave O’Neil Live..ly!

Dave O’Neil has been doing comedy for 30 years!

See him live and the Mount Isa Civic Centre!

2019 has been a big year for Dave on TV, having appeared on The Project’. ‘Celebrity Name Game’, Hughsey We Have A Problem’ and ‘Have You Been Paying Attention’.

Dave is most known for being the most regular guest on ABC TV’s ‘Spicks and Specks’ with over 50 appearances.

“An atmosphere some comedians would kill to be able to generate, sitting in Dave O’Neil’s audience is genuinely to feel like you’ve stumbled into a relaxed conversation among friends… there’s an engaging affability… unprepossessingly good spirited fun.” Chortle

“One of our most accomplished standups.” The Age